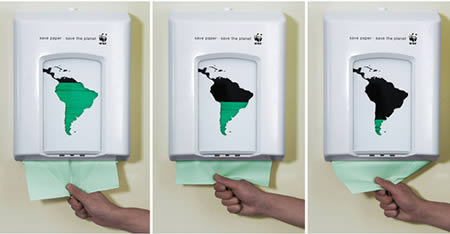 The World of Green Media

If you recently happened to turn on the television, surf the Internet or leaf through a magazine, you’ll noticed that “green” is no longer only the favorite color of environmental groups. “Green” has become “mainstream” and turned into a big business.

The National Marketing Institute estimates that consumers with environmental concerns represent more than $230 billion in spending power. Companies across the spectrum recognize that consumers want to support businesses they perceive as environmentally conscious. In fact, studies show that more than 80 percent of Americans now consider a company’s environmental record an important factor in deciding whether to buy its products. As a result, companies — and more specifically their advertising — are touting the environmental value of their business and products more than ever before. And while such assertions, if true, are universally recognized as a positive, many are questioning whether a majority of today’s claims are more “greenwashing” than an accurate reflection of environmentally sound business practices.

In today’s marketplace, greenwashing describes a company that spends more time and money claiming to be green through advertising than actually minimizing its negative environmental impact. Its perceived prevalence has raised the eyebrows of environmentalists, regulators and lawmakers alike.

The Federal Trade Commission (FTC) is keenly aware of the trend towards increased green marketing and became concerned enough with possible consumer deception issues that it decided to revisit its 1998 guidelines for environmental advertising — known as the Green Guides — a full year ahead of schedule. In January, the FTC held a workshop concerning the marketing of carbon offset programs and renewable energy certificates. The main concern being that as more companies use these types of programs to reduce their net carbon footprint, consumers could be misled about the actual environmental benefit.

In continuation of the Green Guides review, the FTC held a workshop on environmental claims concerning product packaging on April 30. FTC chairman William E. Kovacic opened the workshop by stating that environmental advertising claims are “precisely the kind of state-of-the-art issue” that the commission should handle. Product packaging is an area where environmental gains may be more easily accomplished — refillable containers, paper vs. plastic and cardboard vs. Styrofoam. Therefore, the marketing of environmental benefits with respect to packaging is an area of regulatory interest now and likely even more so in the future.

Many in the environmental community are calling for the FTC to impose much stricter rules on green advertising at the conclusion of its review process. However, the truth is that implementing further government regulation would likely have a chilling effect on an advertiser’s ability to communicate important and valuable information to consumers — and might actually contribute to making our environmental problems worse by stifling innovation. Advertisers have every right to promote their green credentials, and it is important that companies feel the responsibility to do so and to become part of the environmental solution, even if their sense of responsibility may arise more from an attempt to seize a sales edge than a desire to save the world.

Overall, there are strong signs that the environmental marketplace is working and that today’s consumers, as well as current laws, are effectively combining to keep advertisers honest and responsible when touting their “greenness.”

Studies have shown that most customers do not automatically accept green claims, and that nearly half of all consumers take the time to investigate such assertions. For a savvy consumer, the truth about an advertised environmental claim is likely just an Internet search away or can be found on one or more of numerous environmental advertising watchdog sites, like www.greenwashingindex.com.